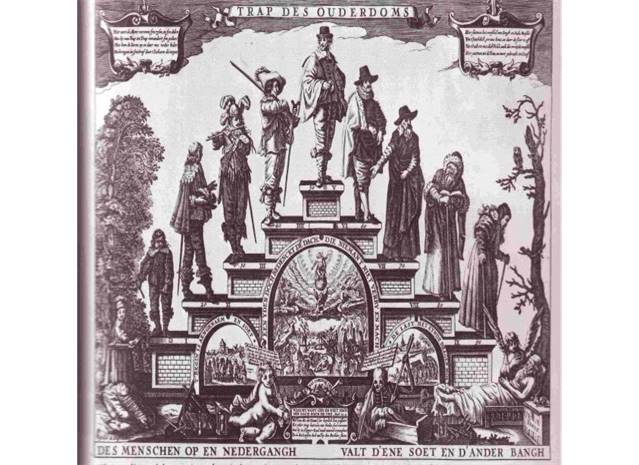 Monty Python’s satire ‘The Meaning of Life’ is a modern portrayal of life divided up into segments and stages. In the Dutch Golden Age, moralists also recognized life to be a sequence of phases, each one with their own attributes. In the seventeenth century, the first self-help books included illustrations of the ‘Ladder of Life’ that displayed a step for each decade, starting with a baby at age 0 or a child at age 10. During the first five decades, people ascended the ladder. However, the last four decades they descended, and the final step at 90 depicted an old man standing with one foot on the ladder and one in the grave. Dutch moralists believed that the best way to offer advice on dealing with the phases of life was with a bit of humor and satire, similar to Monty Python.

In this lecture series Dr. Benjamin Roberts will address how people in the seventeenth century experienced the five major stages of life: childhood, adolescence, young adulthood, the middle years, and old age. The golden age was an exceptional era in Dutch history. Within a short period of half a century the Dutch Republic emerged from a war-torn outback in Europe into the richest country in the world. The country’s Protestant merchant mentality developed an extensive trade network that made Amsterdam the hub of commercial trade in the world. Moreover, the country’s cities rapidly turned into intellectual centers with artists and scientists including Rembrandt van Rijn, Johannes Vermeer, Constantijn Huygens, and Antoni van Leeuwenhoek.

During this period of unprecedented economic growth, cultural and scientific advancement, life for the average man and woman was not always easy. The first lecture in this course will explore how it was to be a child in the seventeenth century when small pox was rampant and half of the children did not make it to the age of 18. At the same time, elite children were pampered and spoiled with toys, received a proper education, and traveled. It will also examine the differences in the upbringing for boys and girls and how boys were formally educated and girls were taught at home.

The second lecture will examine how it was to be an adolescent boy and girl and how young people experienced puberty and when they became sexually mature. It will look into how young people experienced their growing sexuality, experimented with drugs, and how they spent their leisure time, which are many of the same concerns parents still have today.

The third lecture will address how young people found marriage partners, experienced the throes of marriage, started their careers, and juggled their roles as spouses, providers, and parents for their children. We will also delve into the middle years as parents experienced the empty nest syndrome, widowhood, and second marriages. Most people in the early modern period were married more than once. Widows and widowers often remarried for economic reasons but also for companionship. Aging women were confronted with their changing bodies and menopause and middle-aged men felt their decline through waning influence in commerce and political clout. During this stage of life, men and women became increasingly aware of their own mortality and had to find new purposes for the rest of their lives often through religion and spirituality.

The final lecture will address old age in the seventeenth century. When were people considered old and more importantly when did people consider themselves old? According to recent research, the life expectancy rate hovered around 60 years old for a man. However, many people who survived childhood sicknesses lived well into their 70s and 80s, some even into their 90s like the famous Dutch poet, Joost van den Vondel who died at 91. Most elderly had a strategy for a healthy life and longevity.  These will be discussed at length during the lecture. Hint: satire and humor!

This course consists of four lectures that are given on Fridays from 10 AM to 12 PM at the ‘De Roos’-teahouse on P.C. Hooftstraat 183 (right inside the Vondelpark on your left hand). The course starts on Friday January 27th 2017 and ends on Friday February 17th 2017.